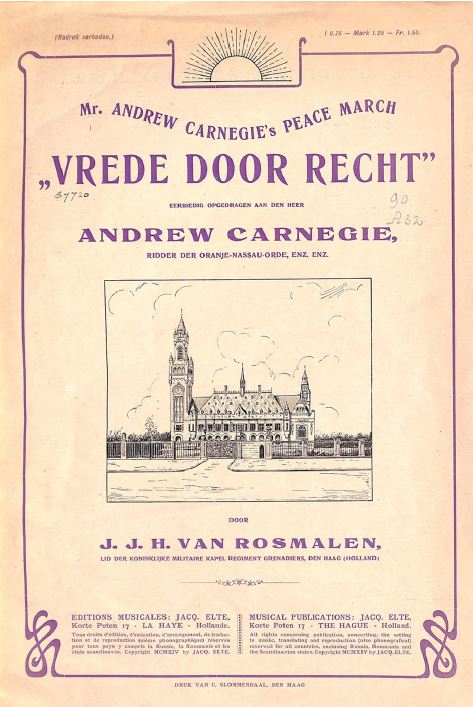 On the 11th of May 1903, the American steel magnate and philanthropist Andrew Carnegie (1835-1919) donated a substantial capital for the founding of a ‘Peace Temple’ in the Dutch government city of The Hague. On 28 August 1913, the Peace Palace, home of the Permanent Court of Arbitration and later on the UN International Court of Justice was officially inaugurated in a grand manner. All over the city, bells were tolling half an hour prior to the start of the solemn inauguration. A more peace full world seemed to be on the horizon.

During the opening ceremony of the Peace Palace a choir performed and the Royal Military Chapel played cheerful music in the newly landscaped gardens. Worthy of note, is that one of the members of the orchestra – J.J.H. van Rosmalen – would receive a personal ‘thank you note’ from the wealthy benefactor Andrew Carnegie about ten months later.

The musician
Jan Johannes Hendrik van Rosmalen was born on 22 February 1886 and married on 7 November 1908 in the town of Tiel, The Netherlands. In the municipal registry it was noted that at the age of 22 years his profession was ‘staff musician’. A local newspaper of 1909 reported of a concert that was recently given by Van Rosmalen and his orchestra: “The music has made considerable progress (…) under its new director, Mr. J.J.H. van Rosmalen”. In May 1912, one year before the official opening of the Peace Palace, the family Van Rosmalen, moved from Leiden to The Hague.

An unknown piece of remembrance to Andrew Carnegie rediscovered
In the extensive Peace Palace Library of International Law, as desired by Carnegie, a very modest collection of sheet music is found, mostly marches with the theme ‘War and Peace’. In the spring of 2017, however, library staff member Rens Steenhard, discovered the forgotten Peace March Peace Through Law, respectfully dedicated to Mr. Andrew Carnegie, Knight of Orange-Nassau. This march was written by J.J.H. van Rosmalen, member of The Hague Royal Military Chapel Regiment Grenadiers, and published in a piano version in the spring of 1914.

The question remains whether Van Rosmalen wrote and published this composition on his own initiative. The title ‘Peace through Law’ is striking. The long-standing Dutch branch of the association Peace Through Law (Association de la paix par le droit (APD)) was very active at the time promoting and honoring the Peace Palace and its founder, Andrew Carnegie, in all sorts of ways. Carnegie was given the title of honorary member of the association and a special Peace Palace remembrance album was dedicated to the new Temple of Peace and its founder, Andrew Carnegie. And finally a bust of the forefather of International Law, Hugo Grotius, was donated to the Peace Palace by the same association. Therefore it would be likely that Mr Van Rosmalen was also given this charming assignment by the Dutch association Peace Through Law.

Publicity
The press also reported on the new musical composition, for example in the paper ‘The Schiedamsche Courant’ of 27 June 1914 is read “ (…) Mr. J.J.H. van Rosmalen, a member of the Royal Military Chapel, wrote a march composed by him, under the title of: Mr. Andrew Carnegie’s Peace March “Peace Through Law “dedicated to the Lord Carnegie, who wrote to him a letter of Thank you. On the title page of the music piece the sun of justice radiates and the Peace Palace is depicted”.
Therefore it would be likely that a copy of the musical composition would also be present in Carnegie’s personal archives, accompanied by the letter of Van Rosmalen. The ‘Thank you note’ received by Van Rosmalen is most probably not preserved.

An adaption for carillon
The peace march exudes the carefree atmosphere of the marches of the time, where John Philip Sousa, among others, were famous for. Whether this march was played frequently is unknown. After the discovery in 2017, however, this cheerful music has sounded more than once on special occasions from the tower of the Peace Palace. As from 3 November 1994, carillon concerts are given twice a week with 48 bells donated by individuals and organizations from the Netherlands and abroad. The instrument is part of the International Network of War Memorial and Peace Carillons. The basis of this network was established in The Peace Palace in The Hague, ‘-International City of Peace and Justice- ‘.

In the light of the commemoration of the 100th anniversary of Andrew Carnegie’s death, on the 11th of August 2019, the administrators of the Network decided to adapt the Van Rosmalen march for the carillon and, after consultation with the Peace Palace Library, to distribute it worldwide.
The Network also offers this Carnegie march to other carillonneurs in the network and encourage them to play it on the 11th of August 2019, in memory of Andrew Carnegie or on the 21th of September, the United Nations International Day of Peace. The musical arrangement is also digitally available in a version for three-octaves carillon.