Architecture
For the design of the Peace Palace the jury launched an international architecture competition. The competition enjoyed enormous interest: a choice had to be made out of 216 contributions sent in from all over the world. From the large variety of drawings the jury selected 6 prize winners and awarded first prize to the design entered by the French architect Louis Cordonnier. The choice for Cordonnier’s design, which was inspired by the architecture of earlier centuries, led to a fierce architectural debate. Many had hoped for a building that also in its appearance would inaugurate a new age.

Cordonnier’s original design was quite exuberant, and impossible to realize within the 1.5 million dollars budget provided by Carnegie for the purpose. The French architect was asked to adapt and simplify his design, resulting in the original number of four towers being brought down to only two. A final design was made in collaboration with the established architect Johan van der Steur, who was also appointed as executive architect for the construction of the palace. In six years’ time, an impressive building in the style of the neo-renaissance arose on the grounds of the former estate Zorgvliet, where former Dutch queen Anna Pavlovna had once resided. The great and small towers mark the two courtrooms, the most important spaces in the palace. 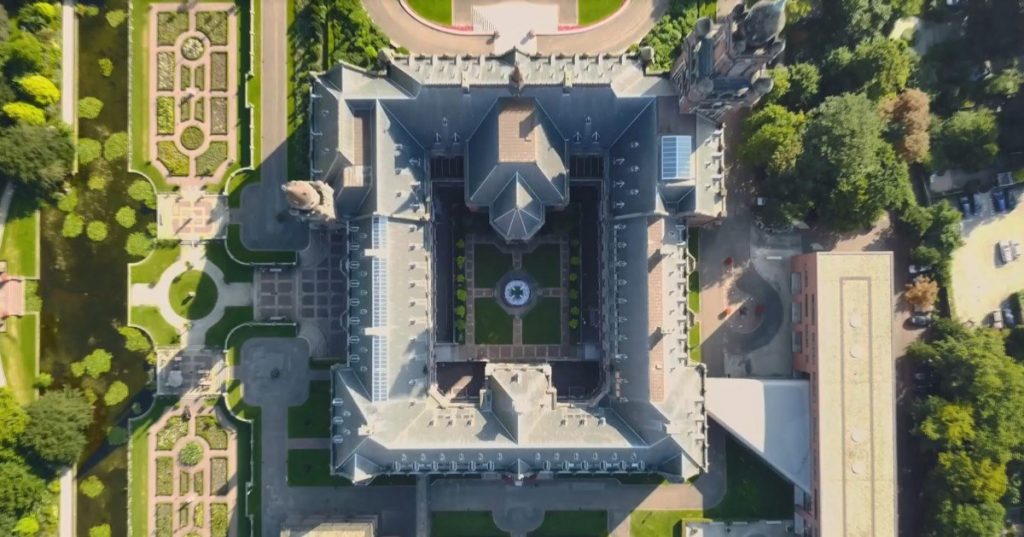 Garden
Andrew Carnegie expressed the wish that the Peace Palace would stand detached from its surrounding environs and be enclosed by a garden. His wish played a part in the decision to build the Peace Palace on parts of the old Zorgvliet park, away from the city center. A competition was also held for the design of the garden and it was won by the British garden architect Thomas Mawson, who was famous for his designs in which garden and building form a unity. For the Peace Palace he also chose to create a gradual transition between garden and palace, with spacious terraces inviting people to admire the gardens. These terraces were laid out in brick, the same material that was used for the palace itself.

Mawson expressed the peace thought in his choice of botanical elements: sharp thorns were avoided, and only trees and shrubs with small leaves were selected, in order to allow as much light as possible to fall into the garden. For the big pond a natural water course from the dunes was adapted. Water, just like peace, is one of the first conditions of life. The roses in the abundant rosarium symbolize love. Because the ancient trees of Zorgvliet shield the garden from the busy city, it is an oasis of peace and quiet.

In an interview with ‘Bij ons in de Residentie’ Dolf van Eendenburg, the garden coordinator of the Peace Palace, tells his fascinating story. Read the interview here and find out what it is like to live and garden at the Peace Palace.