Longing for a New Narrative to Establish Peace in Colombia

By Leonardo Párraga: Youth Ambassador of the Peace Palace 2018

How long will it take, how long will it take? That is the question that I ask myself. How long will it take for the new generation of Colombians to experience peace for the first time in their lives? A few days ago, on 17 January 2019, a car bomb exploded in Bogotá, my hometown, vanishing the life of 21 of our fellow policemen. It is a pain inflicted to our current quest for peace, it is a pain inflicted to our society’s soul. It is the same pain we experience every day when we know that one of our fellow brothers, when one of our fellow sisters, a human rights defender, is assassinated, a routine that is happening almost daily in our country. The lords of violence keep perpetrating acts of terror, but our response to bring about peace should not be with the weapons of hate, but with the instruments of love. While the current administration claims that their priority is to protect the lives of all citizens, what is happening in reality, is that none of the instruments better suited for this task are being used, such as the National Commission for Security Guarantees, which aims to generate strategies to protect the social leaders under threat. This start of the year we had the assassination of 9 social leaders in the first 11 days of the year, almost one a day. How long will it take for this situation to stop?

We are experiencing hard times and difficult days lie ahead of us. Some might say that waging peace is one of the toughest battles. But, is it not the battle of war that we have lost since the beginning? If there is one lesson that we should learn from Colombian history is that the gunpowder has not eliminated our social inequalities, but our hope of ever living together, by leaving dialogue as our last resort, instead of our main option, one with society’s full support.

In such times, our deepest act of solidarity is to demonstrate our love by recognizing that all the pain that we have endured so far, all the massacres that have eliminated some of our best citizens and all the human rights abuses, are acts that should never be repeated. The pursuit of our ideals through violence should never be repeated. To deny the humanity and intrinsic dignity of the other should never be repeated. Our legacy for the upcoming generations should not be to leave them in a war that they do not understand, but to open the door to a future where they can be the architects of their promised land. 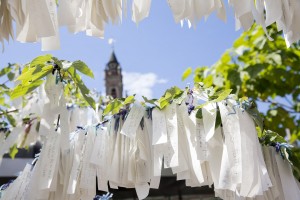 The wishes in the Peace Tree are written in an universal language: Our common desire for peace.
Picture: Inge van Mill

As the youth ambassador of the Peace Palace, the international icon and home of peace through law, it is my role to speak about the importance of the mutual agreement between nations to keep healthy relations. The current government is generating three serious threats to peace by breaking the current protocols established to negotiate the peace agreement with the Ejercito de Liberación Nacional – ELN (National Liberation Army), requesting Cuba to capture the members of the secretariat of this organization on their territory. The main reason to disapprove of this request is that the president considers that the protocols were signed under the previous administration and do not belong to the political vision he upholds. First of all, by behaving in a way that the government is superior to the state, we destroy the institutions that uphold the identity of our nation, and then the president does not act as the representative of the state in an international stage, but rather as an individual. Secondly, the agreements were signed with a big international support and guarantor countries like Norway, Cuba, and Venezuela supporting the negotiation. Suddenly changing the rules of the game and ignoring an agreement acquired with other international parties represents not only breaking their trust but also generating an uncertainty regarding the seriousness of future negotiations. With this, probably losing the support of the guarantor countries for upcoming occasions. Finally, while we as citizens acknowledge the atrocity of the terrorist attack we just experienced, it does not justify that the government takes a retaliation against them passing over protocols agreed on an international basis. The government will be acting on bad faith by requesting to capture the ELN representatives since it created the expectation that they will be protected while negotiating and in case the dialogues were broken, there was a procedure to return to the country. It sets the precedent that future illegal groups in Colombia that are negotiating a peace agreement might not have any guarantees. Thus, reducing the possibilities of reaching a peaceful solution through conversation.