During the 17th edition of the Nobel Peace Laureates Summit, the initiative Cartas por la Reconciliación received the 1 Billion Acts Hero Award in the category of Best Community Act.

By Leonardo Párraga: Youth Ambassador of the Peace Palace 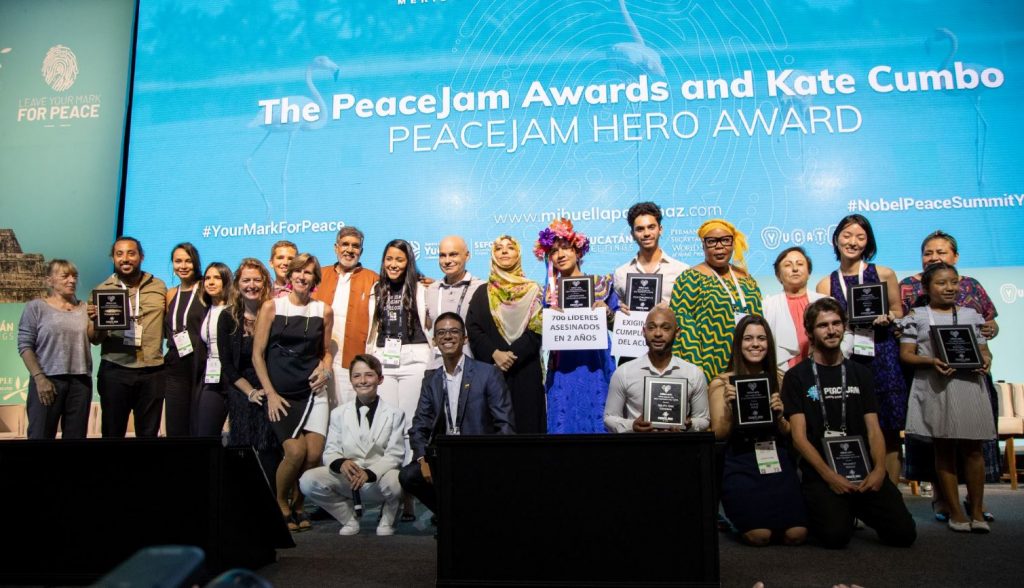 How Letters for Reconciliation was born
The idea to found Cartas por la Reconciliación (Letters for Reconciliation) was born at the World Summit of Nobel Peace Laureates in Bogotá in February 2017, when Leonardo and Cristian had an opportunity to briefly talk with 2014 Nobel Peace Prize Laureate Kailash Satyarthi. The laureate mentioned that we write tons of love letters to those we love on Valentine’s Day, while forgetting the people most in need. His plan this year, he added, was to share love with those who needed encouragement most, refugees in Europe. This planted a seed to start a reconciliation campaign that could reach all corners of Colombia. While it took some time to flourish, generating spaces for interaction between Nobel Laureates and young people can be a powerful tool for change and to spark intergenerational cooperation.

Leonardo, Cristian and a group of friends adapted the idea to the Colombian context and came up with the plan to send letters of hope and support to the ex-combatants of the FARC, now struggling to find their place and establish a new way of life. “The letters will show that Colombian society is ready to change the discourse from a narrative of war to a collective story of peace,” they say. 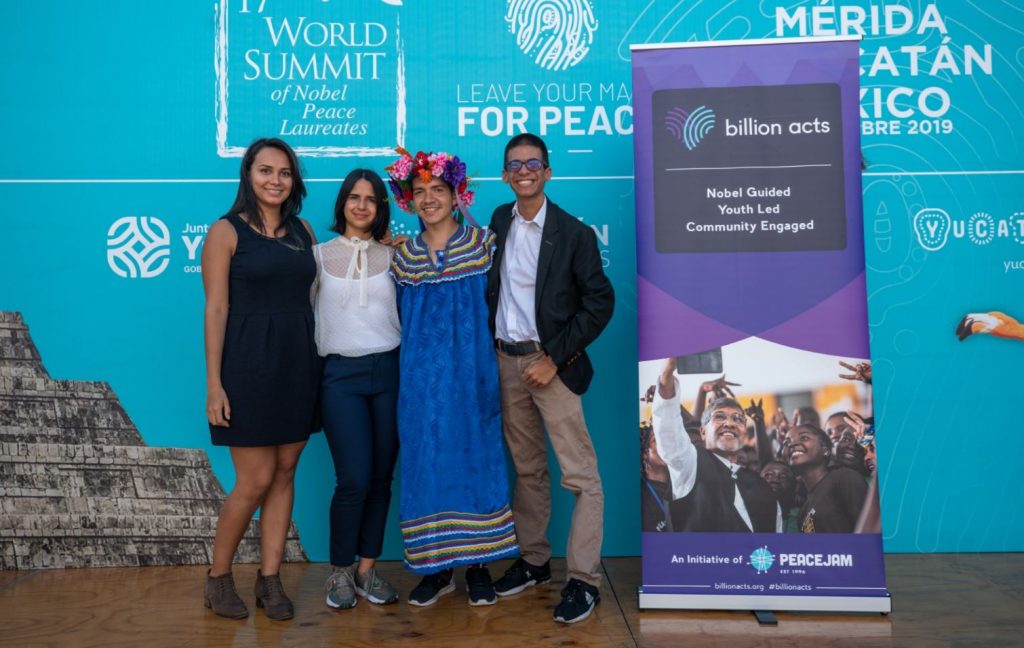 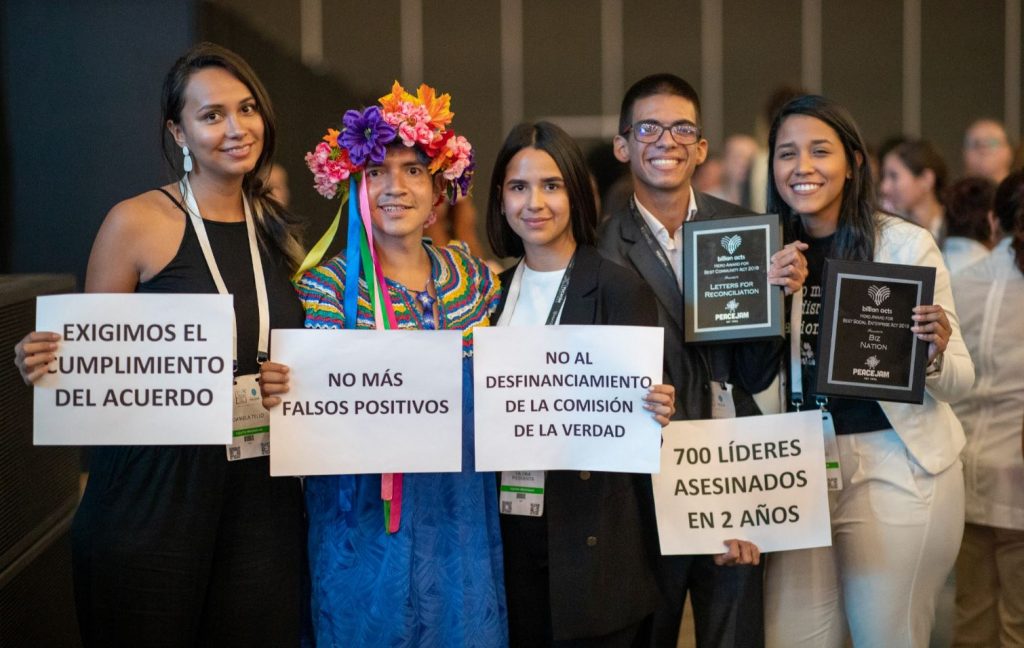 The Project
Communication is a really important human mechanism to generate connection, yet, in contexts that have been deeply affected by conflict, to rebuild the social tissue and create the trust to engage with people who might have hurt us is a big challenge. Meeting face to face with someone that can be considered “the enemy” is a no go for many. However, a letter, a way of communicating we have forgotten in this social media era can both bring a deep message but generate enough distance to prevent the fear generated by meeting the “other” physically.

A handwritten letter is a message that we know another human being wrote, it feels more personal and human than a SMS. As well, it allows us to think more about our words and write something that better reflects what we think, feel and want to convey. With this in mind, as a first step to reconcile those who have lived in the jungle for more than 50 years and citizens who have lived the war through the screens, we decided to create this new space. Aiming to connect from what we have in common instead of centering just on the differences is the campaign’s guiding light.

Now, 5,000 letters after the exercise started, with 4 visits to the FARC encampment (where more than 500 people have participated), we know the impact of this experience through personal testimonials.

Antonia, a mother from Bogotá, writes: “Peace starts with you and with me. I assert that your path is easy and fluent. You are one with the power that created you. You are loved and your life is full of beautiful moments together with those you love. You were born to be happy and free, to be prosperous and abundant, with larger goals and a mission that is up for you to decide. I love you. I truly love you!”

“I’m 32 years old. I’m from Cali. I love history and soccer. America is my favorite team. Thank you so much for your letter and support. It encourages us to give it all for a peaceful country. Your commitment to peace gives us hope of living together in a future where all of us, Colombians, can develop through cooperation and solidarity. Big hugs. Thanks a lot!” said Lucas, a FARC ex-combatant. 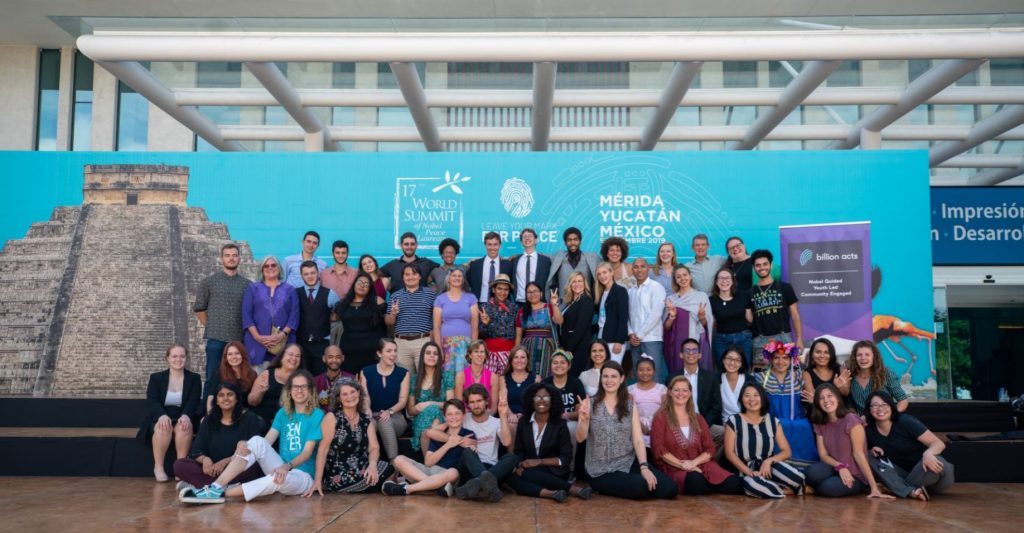 1 Billion Acts Hero Award Best Community Act
During the 17th edition of the Nobel Peace Laureates Summit, the initiative Cartas por la Reconciliación received the 1 Billion Acts Hero Award in the category of Best Community Act, which was handed by several Laureates, including Rigoberta Menchu, Tawakkol Karman, Kailash Satyarthi, Leymah Gbowee, Shirin Ebadi and Jody Williams. During the award ceremony, several of the awardees went on stage with messages related to the current situation of peace in Colombia, highlighting the systematic killing of social leaders since 2016, the need to implement the peace agreement and the limited funding for the truth commission. Leonardo Párraga, wearing a colorful attire, mentions: “Nowadays in Colombia, if you look different, if you think differently, if you speak your truth to power, you are silenced and made invisible, as if you have never existed. Hundreds of social leaders working on causes like environmental protection, land restitution and implementation of the peace agreement have been systematically killed. One of these everyday heroes killed is one too many. This needs to stop. We need words instead of guns to coexist.” Daniela Tello adds “sharing a stage with Nobel Peace Laureates means for us huge support, to know that seeking reconciliation in a country in transition is key and is the pillar is sustainable peace.” 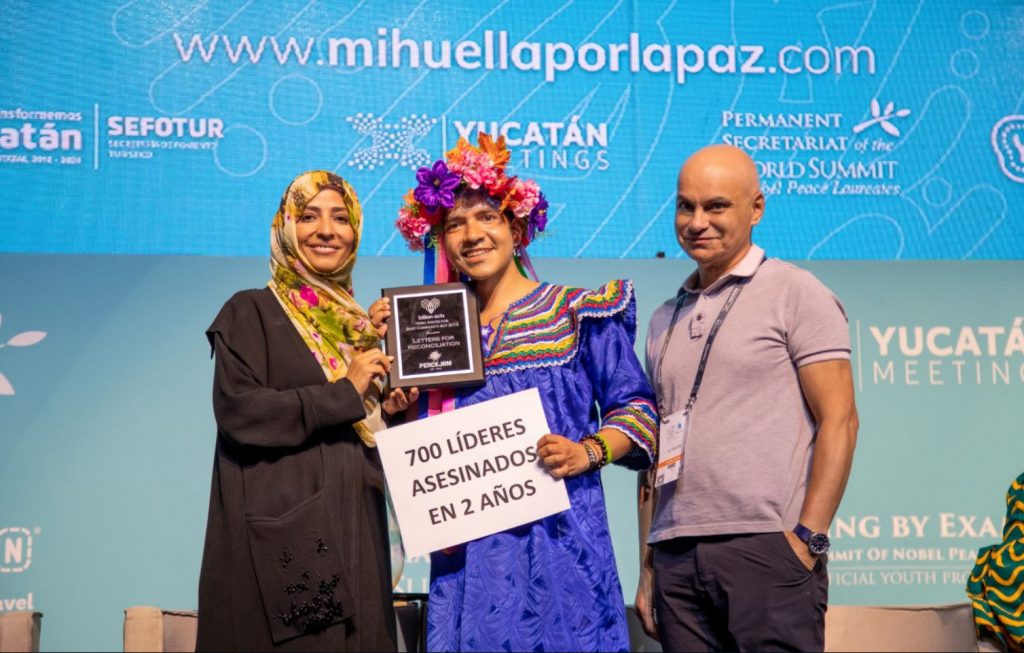 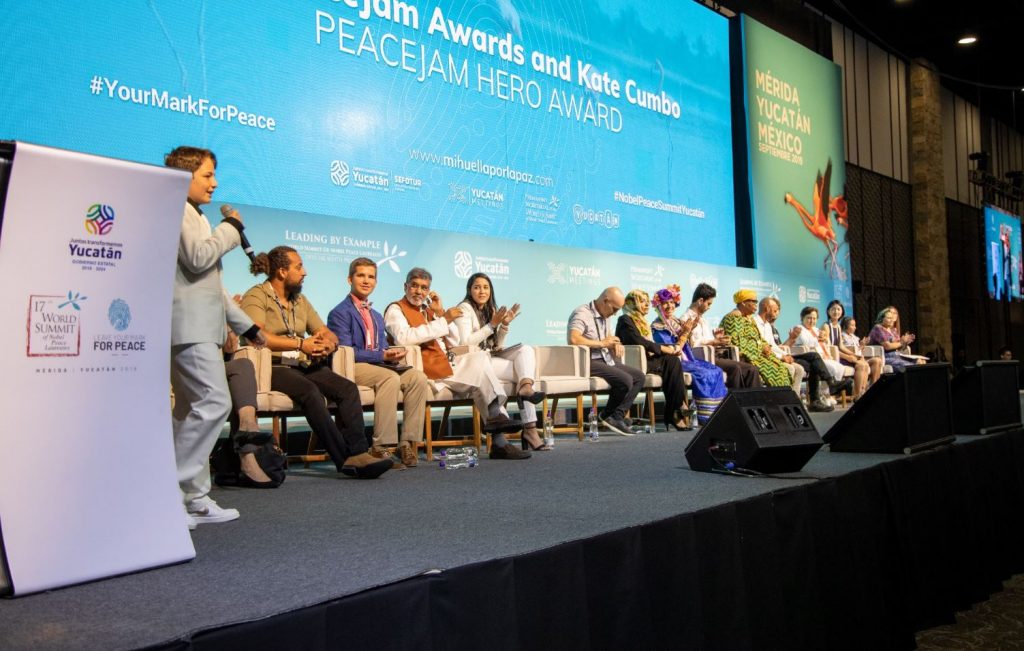 Letters for Reconciliation Workshop
During the summit, the Letters for Reconciliation team ran a workshop together with the other 1 Billion Acts Hero Awards winners. During this space, more than 50 people wrote letters of support for Colombian ex-combatants, particularly taking into account the announcement by a FARC minority of returning to the armed conflict. Valeria Piedrahita, helping to conduct the workshop said: “It is incredible how much we share in common as human beings, even across cultures. We are here in Mexico with a really diverse group of young people and yet they can still relate to the conflict, with needing support and reaffirmation in a moment of doubt (such as the feeling that ex-combatants are currently experiencing).” The participants were excited about having a chance of being able to uplift someone miles away. “I know that feeling of doubt, of not being sure if I made the right decision or not, however, when someone comes out of their way and gives me support, that means the world. I’m glad to pay forward.” 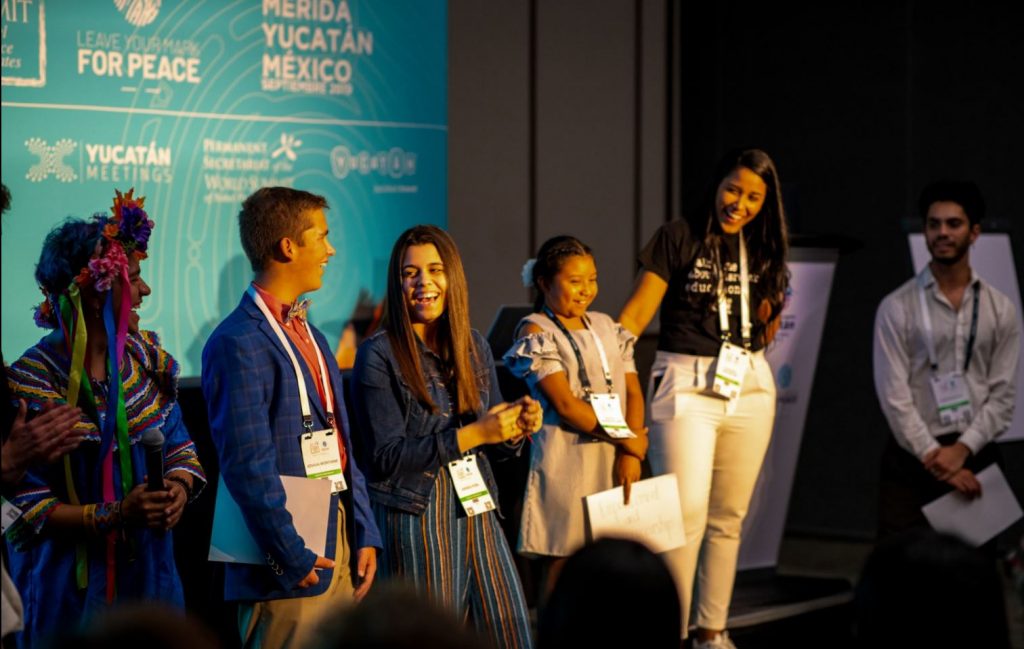 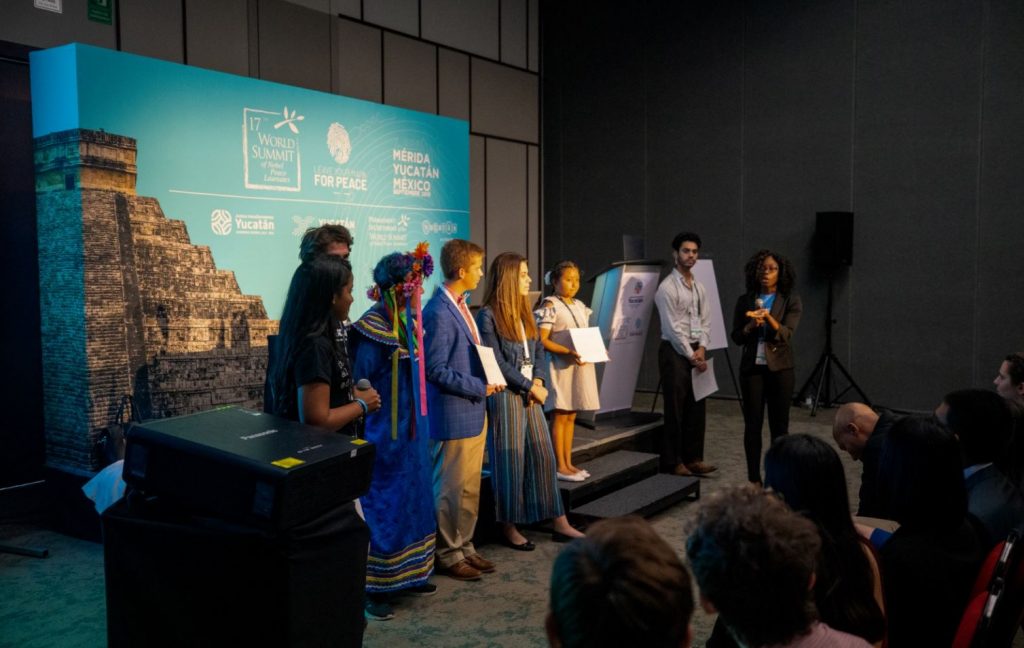