Swiss-based peace mediator “The Centre for Humanitarian Dialogue (HD)” received the 2022 Carnegie Wateler Peace Prize today at the Peace Palace in The Hague. The Carnegie Foundation Peace Palace awards this prize to HD for its more than 20-year track record in ending armed conflict and for its patient, creative and discreet approach.

“The Prize is really an inspiration to me and my colleagues, and we will think of it, and of the values and motivation behind it, when we next find ourselves in a dark place, which is often. It will be a light for us.” – Dr. David Harland, HD’s Executive Director.

Founded in 1999, HD works beyond the confines of traditional diplomacy to establish discreet contact with all types of actors – armed groups, governments, communities and influential third parties – to prevent and resolve armed conflict through dialogue and mediation.

Among many other achievements, HD has supported the peace process in the southern Philippines and brokered an immediate ceasefire in Libya in 2020, ending a chapter of open warfare in the country. For 15 years, HD discreetly contributed to the settlement of decades of violence in Spain, announcing in 2018 that the armed Basque group ETA had disbanded. HD and the Norwegian Ministry of Foreign Affairs co-host the Oslo Forum, widely regarded as the leading international network for mediation in armed conflicts.

During talks between Russia and Ukraine earlier this year on resuming vital food supplies, teams from HD provided advice and assistance to the United Nations and Türkiye-led Black Sea Grain Initiative.

Mr. Piet Hein Donner, Chairman of the Board of the Carnegie Foundation, announced that yesterday a cessation of hostilities agreement was signed in Ethiopia, under the Obasanjo initiative, which was originally conceived and supported by HD in the quest for peace in the country.

“In each case, and many more, the Centre has for more than 20 years operated behind the scenes- patiently, creatively, discreetly – to bring about results that simply couldn’t have been produced by traditional diplomacy.” said Dr. Elisabeth Wesseling-Van Gent, Chair of the Carnegie Wateler Peace Prize Committee. 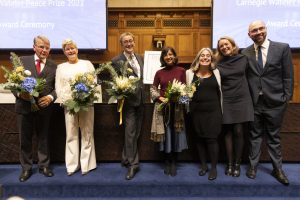