Unveiling of the Armenian Khachkar

When the Peace Palace was built, the participating countries of the Peace Conference were asked to contribute to this “Temple of Peace” by donating building materials or works of art. Many gifts were received during the building of the Palace between 1907 and 1913 in order to emphasize that the Peace Palace is a Court House and Library from the world and for the world. Still, the Carnegie Foundation, owner and manager of the Peace Palace, sometimes receives national gifts from various countries that became independent more recently.

A Khachkar is a flat stele placed outdoors that, when in place, is positioned in relation to the four cardinal points of the world. According to Piet Hein Donner, “the Kachkar is one of the most characteristic symbols of Armenian culture. Like the Peace Palace, it combines past, present and future. Though it is an ancient symbol of more than a thousand years old, the cross-stone remains a contemporary cultural expression. I have been told that Armenian people install these cross-stones both in Armenia and in countries where they settle, as a symbol of hope, peace, solidarity and cooperation.”

Read the full speech of Piet Hein Donner on the occasion of the unveiling here:

On behalf of the Carnegie Foundation I would very much like to thank you mr Prime Minister for the Khackar you have just presented on behalf of the people and the state of Armenia. It is a beautiful addition to the many other monuments and works of art that the Peace Palace houses.

In the diplomatic conference in which the establishment of the Peace Palace as a Court House and Library was discussed, it was suggested that it should be a truly international monument through the national contributions of costly building materials, stained glass windows and works of art. This suggestion was warmly welcomed and as a result the Peace Palace is not only a worthy work of art in its own right, but it also houses a large collection of monuments and works of art from many nations. Thus the Peace Palace has become a monument from the world, for the world.

We are very glad and grateful for this Armenian Khachkar you have just unveiled, as a worthy addition to this collection. It will take the place it deserves coming from Armenia which, though a relatively young republic, is one of the oldest nations in the world.

However the many monuments and national gifts the Peace Palace houses are not meant to turn it into an international art museum in honour of national donors. These many monuments and works of art from nations all over the world constitute an offering to the ideals and aspirations for which the Peace Palace stands. The preservation of peace and the prevention of war through the observance, respect and application of the rule of law in the relations between states.

The Peace Palace is not a historical place. It is not a monument of past grandeur, but a monument dedicated to the future and to the idea of peace through law and justice. It is a reminder of a past in which war and all its atrocities was a normal instrument of statecraft and the usual way to settle conflicts between nations. The Peace Palace, however, was dedicated to the principle that might is not right and that war is not an inevitable part of international relations and human society. Carnegie called it a Temple of Peace and over time it has become an icon to the perennial aspiration of humankind for peace and the rule of law in international relations. A mission that has not lost an ounce of its relevance and that requires constant vigilance and permanent effort of all of us.

A gift to the Peace Palace, like the Khackar of Armenia we have just unveiled, is not a contribution to a collection of art and mementos. It is a dedication by its donor that implies a commitment to the ideal for which the Peace Palace stands: peace, justice and the rule of law, both within national societies and between states. Because the two are not separable. Peace is not merely the absence of war and the prevention of armed conflict. It is a quality of human society and does not exist where people have to live their daily lives in constant fear of violence and insecurity, regardless of the external or internal origin of this fear. The preservation of peace and the prevention of war start at home and in our national societies. It is a precondition we often neglect till it is too late. It requires constant effort and the nurture of positive social forces and dynamics. Peace requires courage; civil courage and political courage to act and intervene in a timely fashion in social dynamics that so easily degenerate into social conflicts and violence. It is far easier to start a war than to end one, but that realisation often comes too late. Not for nothing it says in the Bible: `blessed are the peace-makers, they shall be called the children of God´.

We are very glad and grateful that Armenia now also has its own monument in the Peace Palace and thereby commits to this mission. As I understand it, the Kachkar is one of the most characteristic symbols of Armenian culture. Like the Peace Palace, it combines past, present and future. Though it is an ancient symbol of more than a thousand years old, the cross-stone remains a contemporary cultural expression. I have been told that Armenian people install these cross-stones both in Armenia and in countries where they settle, as a symbol of hope, peace, solidarity and cooperation.

As a Carnegie institution we are particularly happy to welcome this monument of Armenian culture, as we have in the past profited from that other monument of Armenian culture: Vartan Gregorian. As President of the Carnegie Corporation in New York, he united the Carnegie institutions worldwide, turning them into a broad family. He also provided substantial material support for the mission of the Carnegie Foundation and the Peace Palace, in particular by supporting the modernisation of the Peace Palace Library. A library, he once said “marks an act of faith in the continuity of humanity”. Let us hope that this Khachkar will also remind us to keep faith in the continuity of humanity. 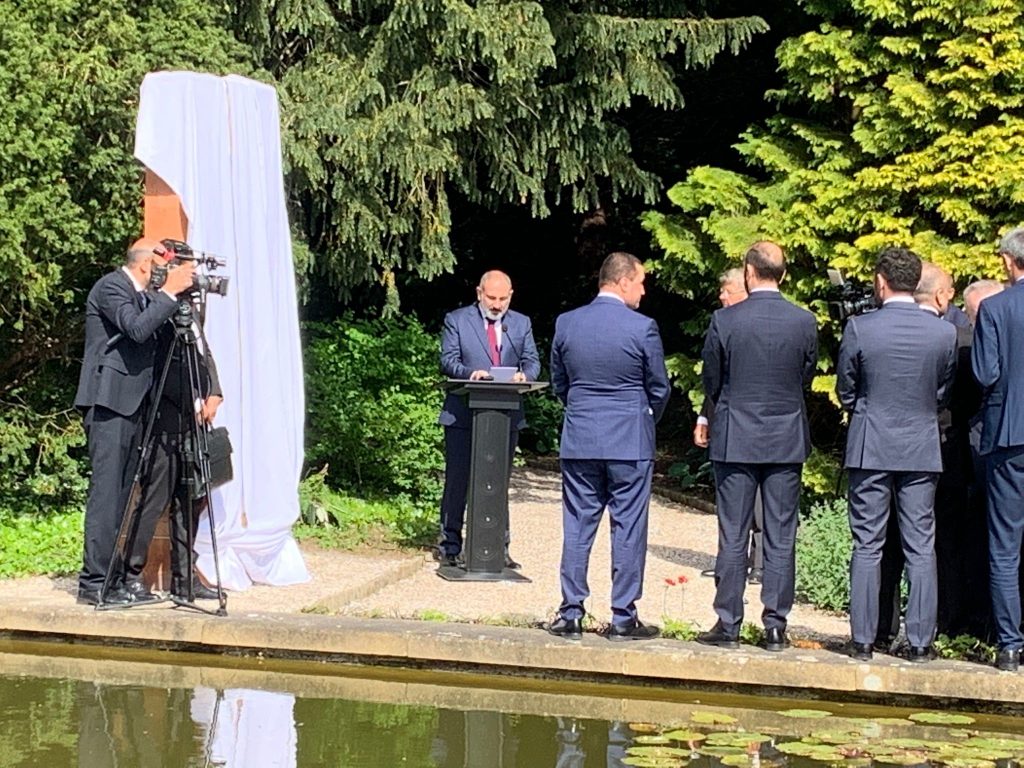 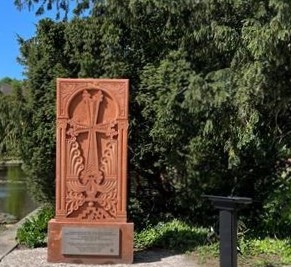 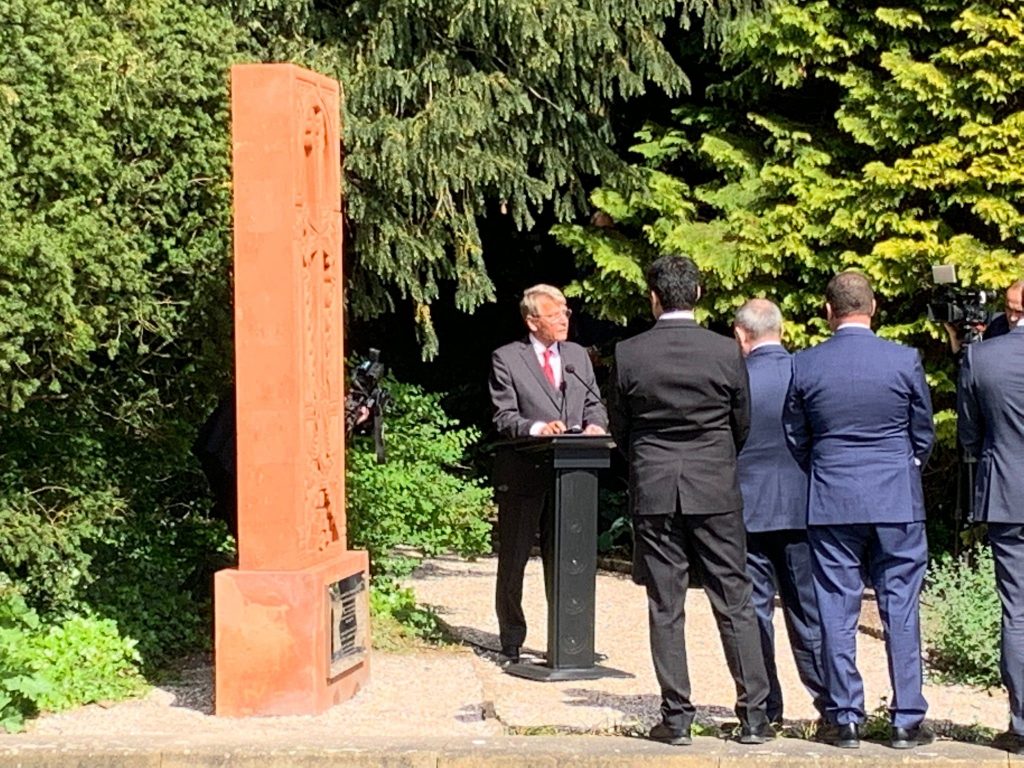 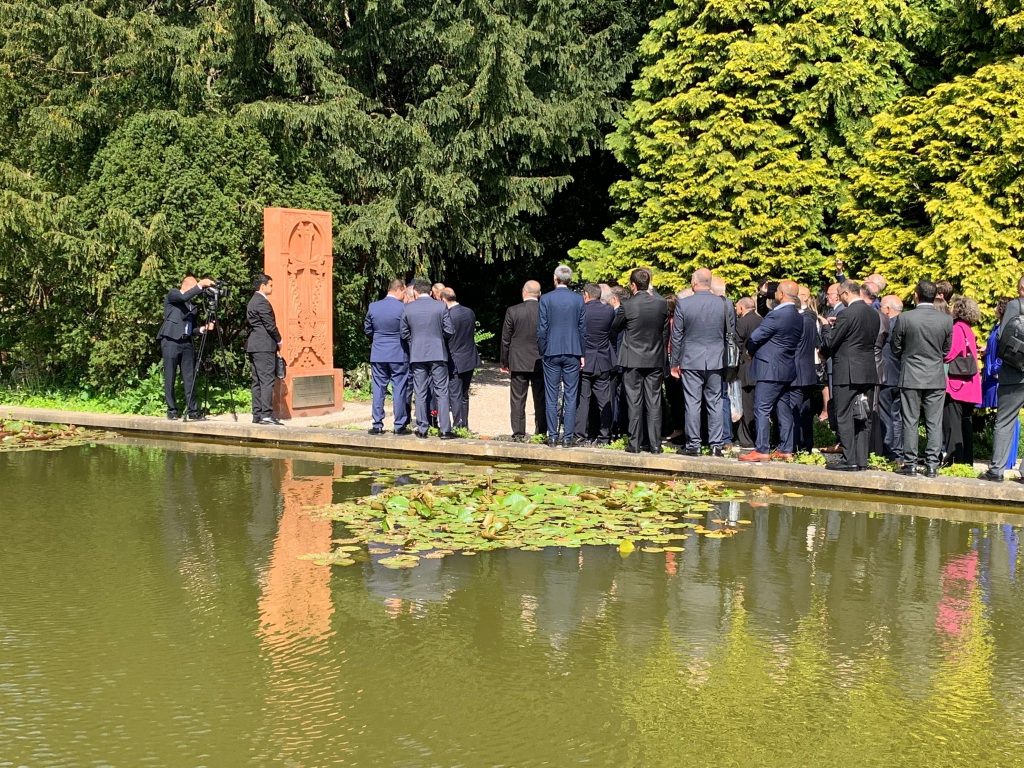