Did you know that the youngest designer of the Peace Palace was also an Oscar-winner?

Just 24 years old, the Hague-born Herman Rosse was selected to design the interior of a building which would come to embody the collective desire for peace by countries from all over the world. This was not an easy task, especially for someone so young. However, Herman was no ordinary young man; by the age of 24 he had already studied under a leading designer in the Arts & Crafts movement in London, earned a Bachelor’s degree in Architecture in the United States, been part of an artists’ commune and had travelled to the Far East. He was a man with ambition, a vast artistic experience and the talent to do great things. It would eventually lead him to becoming the first Dutchman ever to win an Oscar.

Modernism Meets Traditional Art
Although so fresh he didn’t yet have any public projects to his name, Herman was a promising designer and was chosen to design a large proportion of the interior decoration of the Peace Palace such as the ceilings, the windows and the tiling. His style was a combination of classical art motifs whilst embracing the clean lines of modernism. Whichever room you stand in, Herman’s artwork will be visible somewhere.  His most notable work is that of the ceiling of the central hall of the Peace Palace. It features the goddesses of Peace, Law, Order and Justice. Be careful not to get dizzy when looking up at it! 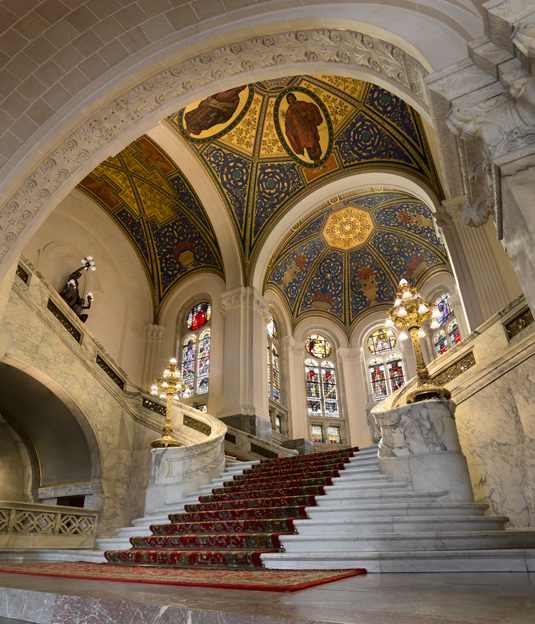 From The Peace Palace to Hollywood
Herman’s Oscar was for Art Direction in the film The King of Jazz (1930). He designed costumes and sets for the film and was very inventive with his use of colour, especially concerning the musical number Rhapsody in Blue because at that time the colour blue could not be picked up by the cameras! For someone with a seemingly classical art background, this move into films may seem an odd step but Herman’s travels and studies not only made a professional designer of him, but also awakened in his heart a love of theatre. The Peace Palace was, in some ways, the first major set which Herman designed; the Peace Palace was on the world’s stage with the attention of the public firmly fixed upon it because it was the foremost symbol of the new peace movement. It was new, exciting and much was expected of it. When considered in this way, Herman’s segue into Hollywood doesn’t seem so strange!

Uncovering the Past
The stories behind the interior designs and designers have never before been explored in great detail. However, they contributed to making the Peace Palace not only a unique building and a product of an era, but also a visible icon of peace and justice.

The fascinating career of Herman Rosse makes us especially curious.  Until recently, preliminary sketches of his designs were a little thin on the ground and most of his legacy remains in his finished products. Ambitious and fast-moving, he left no paper-trail of designs by which we can follow his career, which makes telling his story rather challenging! Thanks to conversations with his remaining family we have slowly pieced together his extraordinary life and his grandson Mark, kindly donated a sketch of the tile work in the rear corridors. This can be seen during guided tours.

Would you like to learn more about the interior design of the Peace Palace? A special magazine about Herman Rosse and his decorations is available on our webshop and in our Visitors Centre.