Bertha von Suttner (1843 – 1914) was an Austrian radical pacifist and one of the key figures in the fascinating Peace Movement that arose during times of great tensions between the European states. A stay in the Caucasus at the time of the bloody Russo-Turkish War gave her pacifist ideals more shape. She expressed her aversion to wars in the novel “Lay Down Your Arms!”.

Von Suttner managed to surround herself with statesmen and pacifists, maintaining close ties with Henry Dunant, discussing the role of women with Aletta Jacobs, and urged Alfred Nobel to establish the Nobel Peace Prize. In 1905, she was the first woman ever to receive the award.

Bertha von Suttner and the Peace Palace
Von Suttner did not only write the book that inspired the Russian Tsar Nicholas II to organize the First Hague Peace Conference in 1899, but also approached Andrew Carnegie after this conference to support the construction of the Peace Palace. With success: thanks to Carnegie’s donation, the Peace Palace opened its doors in 1913 and today houses the United Nations International Court of Justice, the Permanent Court of Arbitration, The Hague Academy of International Law, and the prestigious Peace Palace Library. 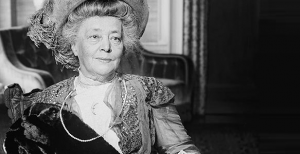 About the book “Lay Down Your Arms!”
Martha Althaus is an Austrian aristocrat who seems to have it all: money, pleasure, prestige and love. But because her life has been turned upside down several times by wars, her life history has turned into an indictment against the futility of the armed struggle.

“Lay Down Your Arms!” first appeared in 1889 and struck like a bomb. Unlike her contemporaries, she did not describe the war from a hero perspective, but expressed in a personal and painful way what war does to people: how it tears families apart, disrupts social relationships and negatively affects prosperity. Within a few years, the book was translated into 26 languages ​​and moved people from all over the world to commit to peace.

New retranslation “De Wapens Neer!”
The influential book was last published in Dutch a hundred years ago and was then immediately sold out. Thanks to a successful crowdfunding campaign, the support of the Embassy of Austria and a subsidy from the Dutch Foundation for Literature, the Carnegie Foundation Peace Palace and publishing house Orlando were able to present the new retranslation of the masterpiece on 21 September 2019, International Day of Peace. 130 years after the first edition, it is finally available in Dutch again. Even a century after the first publication, this manifesto against the war is still relevant until today. 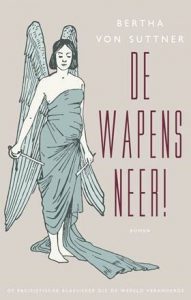 The new Dutch retranslation of “Lay Down Your Arms!” is available in our webshop.