An Analogue Footprint? Expressing your Identity in the 20th Century 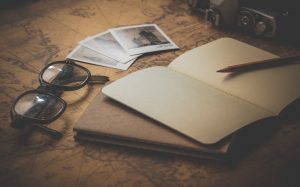 Even though nowadays we can take photos all the time and see them instantly, photography always was and still is very much associated with memory and identity; we used to only take photos at special occasions to preserve memories of a happy time but even now in the digital age we tend to only show our best pictures online, pruning the memories we want to keep and cultivating our online persona. Do you ever wonder if the pictures we create today will be remembered in one hundred years-time?

For Herman Rosse, his best pictures from his travels were something he chose to memorialise inside the Peace Palace and have lasted for over 100 years…

Adventures Abroad
For Herman, his sketches were proof of his interest in the exotic and his far-flung travels. After completing his studies in America in 1910, he took the scenic route back to his home in The Netherlands when his grandfather left him an inheritance. With sketchbook in hand, Herman decided to travel around the world to see “all the great places of art and architecture”. Venturing to the Far East – in particular Japan, Java and Borneo – he made countless sketches during his journey. Captivated by the way people from different countries dressed, his sketch work was more often focused more on the way their clothes looked than on the intricacies of facial features or hands.

When he was later asked to create designs for the interior of the Peace Palace, Herman fashioned his own way or sharing his holiday pictures by including these sketches in his designs for the carpentry of the Administrative Council Room of the Permanent Court of Arbitration (PCA). 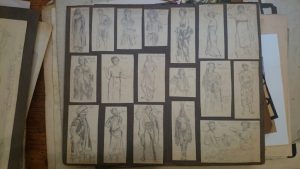 Sketches Herman made while abroad

Designing a Home for International Arbitration
An initiative by countries from all over the world, the Peace Palace was designed to house the International Permanent Court of Arbitration and was, therefore, intended to be a space where all countries would feel welcome. The way this multicultural atmosphere manifested itself was thanks in part to all kinds of gifts from all over the world, which has been requested at the Peace Conference in 1907. The challenge for the interior designers of the building was to adapt their designs for the building so that they would harmonize with these international gifts, symbolising that the best of each individual country could assemble to create something even more beautiful.

Well-travelled interior designers of the Peace Palace, such as Herman and the tile painter Leon Senf, took their décor inspiration from the foreign art styles popular in Europe at that time such as the Oriental style – at that time it was not unusual to see elements of foreign design incorporated with western ones. The Administrative Council Room of the PCA is a good example of this technique in action. The room now houses nine silk wall tapestries which were donated to the Carnegie Foundation by Japan in 1913 and soon gave the room its nickname the “Japanese Room”. Despite its name, the gifts of other countries were also included in the decoration of the room, namely: wood from Brazil, Chinese temple vases and an enormous Turkish carpet. The way Herman worked around the puzzle of creating interior harmony was by shaping the different Brazilian wood types, used in the wainscoting, around the door frames and tapestries, into forms which gave the room an Oriental feel.

The wood cut and gold-leaf friezes which rest above each doorway of the room were inspired by the sketches he made of people whilst overseas and also add to an exotic atmosphere. Although created over one hundred years ago, the gold-leaf applied to the woodwork is still as beautiful and vibrant as ever.  Titled “The Watercarriers”, there are three friezes in total, each featuring two women carrying a ewer, surrounded by strongly stylized acanthus leaves and olive branches. Upholding something heavy between them, they symbolize cooperation. The ewer is a visual representation of the very purpose of the Peace Palace and the Courts of Arbitration; the ewer is the heavy burden countries must together bear when they meet to work towards peace; each country has their own responsibility to uphold their side of the agreement or the arrangement will fall. One person cannot uphold peace alone, there must be cooperation.

Not only are “The Watercarriers” a representation of Herman’s identity and a memory of what he did on his travels, but they have also come to symbolize the core identity of the Peace Palace itself. The pictures he made have come to embody something much greater than they may have originally been intended to be.

Though they might represent your individual identity in the present moment, who knows what your pictures will mean one hundred years from now? 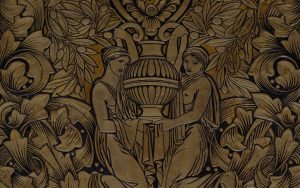 The watercarriers are a symbol of cooperation – two people working together to uphold something heavy.

Coming up in our next blog: costume and stage had a farther-reaching influence than just the Japanese Room – we reveal the secret side to some of the Peace Palace’s stained-glass windows…

Would you like to learn more about the interior design of the Peace Palace? Guided tours are run regularly and you can visit the visitors centre during these times.

If you got curious about Herman Rosse, you could follow our monthly posts or read the illustrated ‘Herman Rosse’ magazine to get to know all about his decorations in the Peace Palace and the thoughts behind it. Here you can also purchase a card with the image of  the ‘Watercarriers.’