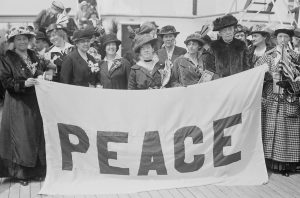 Female delegates to the International Congress of Women in The Hague, aboard the ”MS Noordam.” April 1915. Bain Collection Digitized by the Library of Congress.

On March 8, it is International Women’s Day. According to the United Nations, this day “is a time to reflect on progress made, to call for change and to celebrate acts of courage and determination by ordinary women, who have played an extraordinary role in the history of their countries and communities”. We take this as an opportunity to commemorate Dr. Aletta Jacobs and Bertha von Suttner. Two women who were of great importance for women’s rights and the peace movement.

Dr. Aletta Jacobs (1854 – 1929) is well known for being the first Dutch woman to graduate from university. She studied medicine at the University of Groningen among male students only. She later joined the Suffragette movement and became a fierce advocate for women’s rights. Her efforts were entirely successful and in 1919, Dutch women were finally granted the right to vote. Besides, Aletta Jacobs initiated the International Congress of Women that took place in The Hague in 1915. This important international peace meeting for women a year into World War I was a way to publicly protest the war as well to develop resolutions on international arbitration and dispute settlement.

Bertha von Suttner (1843 – 1914) was an Austrian pacifist and one of the key figures in the fascinating Peace Movement that arose at a time of great mutual tension between the European states. She surrounded herself with statesmen and pacifists, maintained close ties with Henry Dunant, discussed the role of women with Aletta Jacobs and was a close friend of Alfred Nobel. Von Suttner not only wrote the book “Lay Down Your arms!” that served as inspiration for the First Hague Peace Conference, she also approached Andrew Carnegie after the conference to support the construction of the Peace Palace. With success: thanks to Carnegie’s donation, the Peace Palace could be opened in 1913. 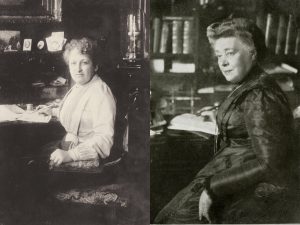 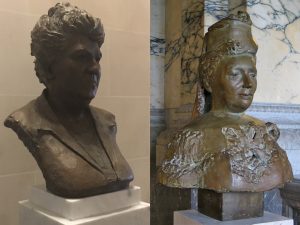