A Utopian Vision of the Future… in Scheveningen??! 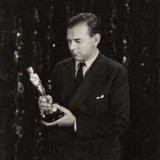 The designers behind the great artworks of the Peace Palace are part of a research project by the Carnegie Foundation. Amongst these designers was Herman Rosse – the youngest, least-experienced of them all – yet his artworks cover the largest surface area of the building. His work here was the start of a wondrous career that would lead him to an Oscar.
We followed his tracks, from several archives to his children, to find out more about the man behind the most impressive artwork of the Peace Palace.

Take a moment. What does the future look like to you?
When we think about the future, we often associate it with science-fiction: sky-scraper cities where everyone has a hovercar. Could you imagine the future beginning at the beach? Long ago in 1945, Herman Rosse, Oscar-winner and Hague-born designer of the Peace Palace interiors definitely could.

Commissioned by the Tourist Information Centre, Herman was asked to create plans to rejuvenate the seaside resort of Scheveningen because the Second World War had badly affected it.  Cutting right across the beaches was the Atlantic Wall – a Nazi fortification left over from the war and it meant that the resort was not accessible to the public. The goal of the project was to get rid of the seaside’s association with being a warzone and to turn it into a peaceful place where people could enjoy life together once again.

Having lived through the Nazi occupation of The Netherlands and with years of practice designing fantastical concepts on a large scale in Hollywood and at the Peace Palace, Herman had grand ideas and dreamt of a bright future – a utopian, almost sci-fi-like vision of Scheveningen.

But what did he want to change about Scheveningen and how successful were his plans? 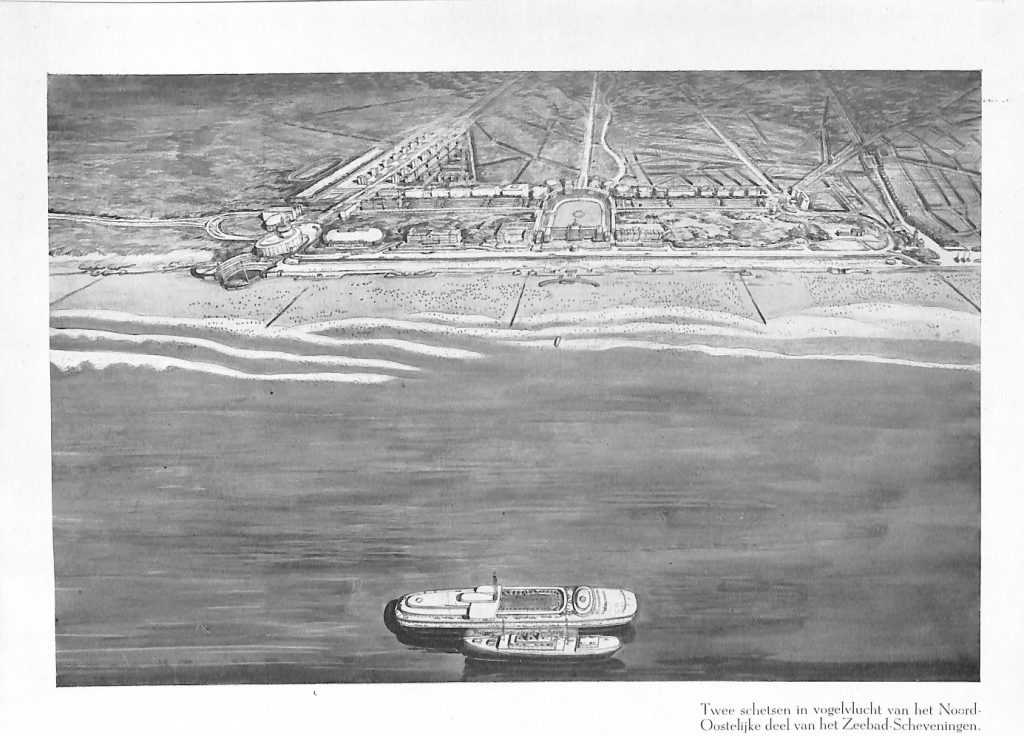 Futuristic Visionary
Despite originally coming from South-Holland, Herman’s life and designs contained huge traces of American culture from his life in the States; for the sleepy seaside resort of Scheveningen he envisioned creating a 100m-wide road from Voorburg to Scheveningen, passing through Koekamp, the Malieveld and the Scheveningse Bosjes in order to create a highway to the beach. Although they still weren’t widely used by many people in the 1940s, Herman planned to create underground parking for thousands of cars and tens of thousands of bicycles! He was clearly a man ahead of his time, and by concealing the vehicles underground it would minimise the industrial impact on the beautiful natural views of the seaside.

Much of Herman’s designs had a focus on uniting the manmade with nature – a concept which can be traced back to his interest in the Arts & Crafts movement with its marriage of past and present by combining traditional art with the lines and geometrics of modern art. His designs for entertainment centres and hotels all connected with nature in different ways. Fascinatingly, he designed a hotel built into the landscape of the dunes, intended for the wealthier, nature-loving visitor. The hotel rooms were intended to be like small villas with interiors referring back to the old days of Scheveningen and fishing – they were retro, yet modern – and with air conditioning! 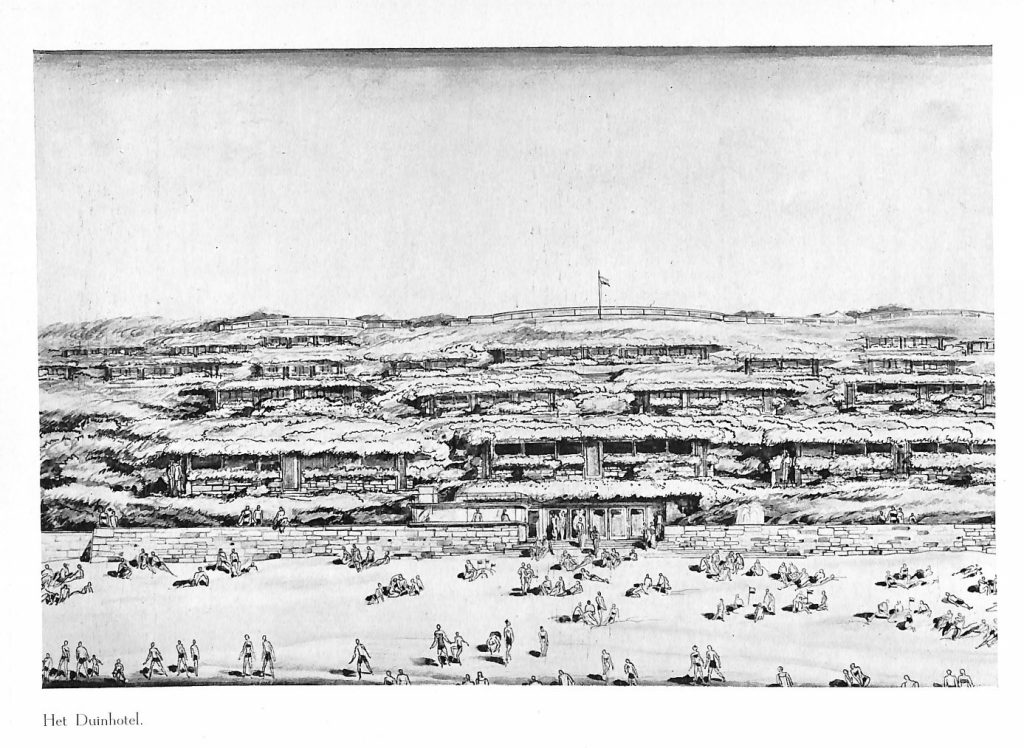 The Dune Hotel built into the landscape

The plans for the Scheveningen rejuvenation included designs for a beach-side amphitheatre which could be partly filled with water so that the public could watch diving demonstrations. Similar to the Forest Theatre – an open-air theatre which he worked on in Carmel-by-the-Sea, California – the amphitheatre connected with the surrounding nature and used it as a backdrop for performances.

Even the coast line received a Herman makeover! Due to war damage, the pier was in disrepair and instead of planning to restore it, he didn’t include it in his plans at all because he felt that piers were old-fashioned and he wanted to bring something fresh and innovative to Scheveningen.

What he created instead was far more fascinating!

Bobbing on the sea, Herman created plans for a floating entertainment pavilion which could only be reached by an underwater tunnel. How futuristic! This pavilion would have dance halls, cafés and would feature fireworks displays with an electric light-show and smoke. It was yet another way of connecting culture with nature and the innovative technology he was proposing to realise his ideal had clearly been inspired by his recent work at the World Fairs in Brussels, 1935 and in New York in 1939.

With such incredible idealism, how was Herman planning on financing his imagination?

Funding the Dream
Having worked on many World Fairs over the years, most recently in New York in 1939, Herman decided that planning a World Fair in and around Scheveningen would be the solution! It would draw in a lot of revenue and after the Fair had ended, many of the pavilions and buildings erected specifically for it could just stay standing…

Unfortunately, Herman’s creative design for a futuristic Scheveningen were not accepted. It was simply too ambitious and expensive for a country which had only just been liberated from Nazi occupation. The Netherlands had also just managed to survive the Hunger Winter of 1944-45 and so any money that the Dutch governments had needed to be spent on infrastructure and things the public desperately needed.

Despite this, Herman’s plans were part of an exhibition on city planning at the Panorama Mesdag in The Hague. And perhaps, in a roundabout way, his plans have continued to influence the development of The Hague and Scheveningen: he aimed to make the seaside more democratic as before World War Two the area around the Kurhaus was strictly aristocrats-only. The beach is now very much for the many, not the few. The fireworks which he had planned to be launched from the floating pavilion (although the pavilion was never created), are still fired from a platform from the sea every August during Scheveningen’s annual fireworks festival.

Although it’s now 72 years since he created his vision for a futuristic Scheveningen, some of his plans are still intriguing and could still work. Should an entrepreneur one day to decide to make Herman’s Dune Hotel a reality, it would certainly be a popular attraction! 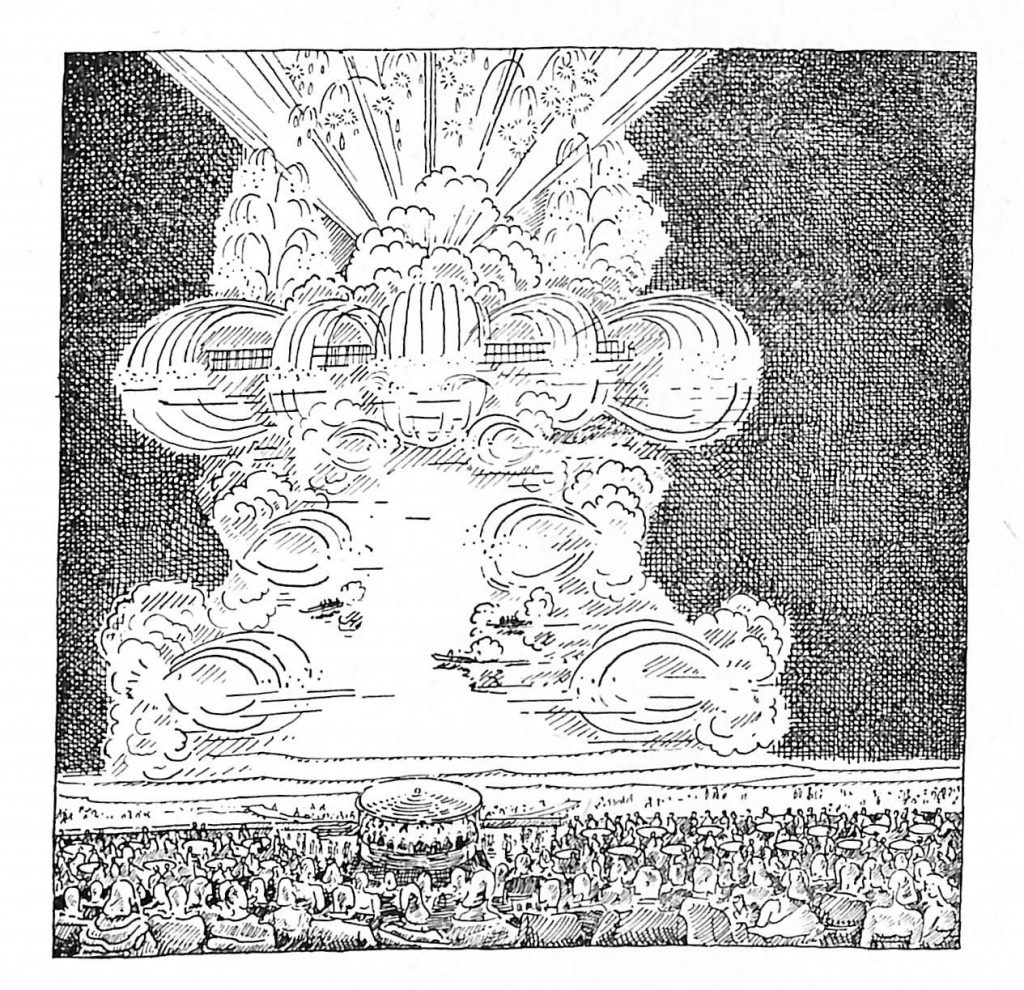 Many thanks to Lex van Tilborg of the Hague Historical Museum for his contributions to this article.

To Our Readers – thank you for reading our series on Herman Rosse. We hope you enjoyed learning about this fascinating man and if you would like to learn more, please order the magazine we made about him and his work for the Peace Palace.

Join us next month for the new installment.
Would you like to learn more about the interior design of the Peace Palace? Guided tours are run regularly and and you can visit the visitors centre during these times.